Yes, ok, we skipped a Sunday, but we’re busy here cooking something new up. This should be the source of not a little alarm.

Today’s offering is a suitable abstemious and chaste white brocade biretta, worn by Bishop Bonner of the Pentecostal Elim Church. We rather like the idea of liturgically coloured birettas; sure as we are that they will bring many of you out in hives. They have a certain joie de vivre about them, and now spring is finally upon us I am sure we could all do with a bit of that. 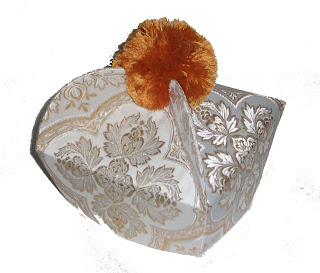 For those of you in the doldrums of Lent 1, we thought we’d raise your already flagging spirits with an entirely gold lamé Spanish bonete; nothing quite says penitence, fasting, and abstinence like an utterly unrepentant hat. Proof if proof were needed that you simply cannot over-accessorize.

Surely another piece of adornment for statuary you say, but no; this is in fact to be worn by a Pentecostal apostle. You might accuse us of being a bit of a broad church here at this frousty gothic convent, but we’re always happy to entertain the inventive.

We’re in for it if Mother Prioress gets wind, but for the next few days we’ll try to post some of our more unusual confections for your delectation. Before we’re handed the flagellum. Again. 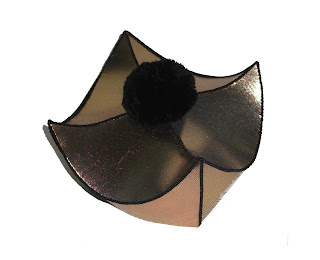 Canons Regular of the Mother of God

Not to be confused with the hat of a Norbertine Canon, having as it does three instead of four blades, here we proudly present the Bireta of les Chanoines Réguliers de la Mère de Dieu, a relatively new order, founded in 1997. A curt 'not so you'd notice' has emanated from behind the pages of the Racing Post, though if this link is anything to go by Mother Prioress may have a point: http://www.youtube.com/watch?v=PR2y8S7gPsE . We don't presume to know our readership completely, but we rather suspect that you'll probably like a bit of That Sort of Thing. 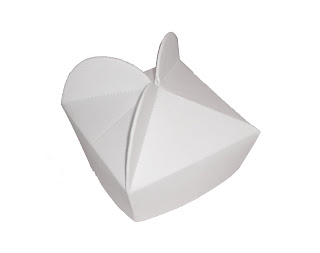 
If ever you’re so lucky, or so unwise, as to cross the imposing neo-gothic arches of DB Towers, and you make it past the gun turrets and barbed wire, you might just sneak a glimpse of the beating heart of the convent hat factory. To do so would place your very soul in mortal peril, so in true Willy Wonka fashion we have invited you dear reader, digitally at any rate, to witness the secret world of the ecclesiastical milliner. As you can see from the pictures, the walls are festooned with every conceivable flavour of Biretta known to man, and bizarrely still the number increases as new discoveries are made, new combinations unearthed. Some people, people like you and people like us, get rather excited about that sort of thing. Mother Prioress says she doesn’t know about excited, but she does know that we’re ill.

Our sincere apologies for the lack of Material. We’ve been up to all sorts, but new items for your viewing pleasure will be coming soon. 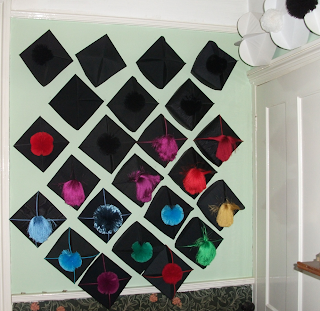 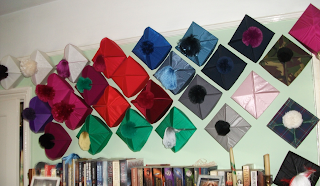 Yes, we love this country…

…being the national anthem of the homeland to the recipient of this, even if we do say so ourselves, splendid example of craftsmanship. Made on the 4th January 2012, but kept from your screens so as not to spoil the surprise, as it is a birthday present for a Norwegian Rector from east London. If you’re reading this Father, many happy returns from all the good sisters of DB Towers, ourselves also naturally, and the customary tight lipped salutations of the day from Mother Prioress.
The creation of this piece, and the dramatic weather at the time of writing, cast something of a Nordic air about the convent. Sister Brunhilde was apprehended skateboarding around the cloister with this four horned helmet at a rakish angle atop her head whilst playing Ride of the Valkyries on the convent gramophone. Sadly Brunhildr is no match for the mighty Thor that is Mother Prioress. 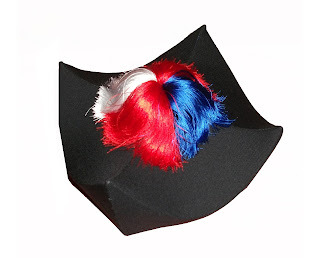 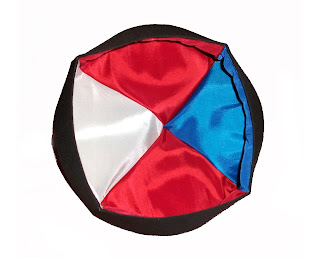 Today's offering is a Royal blue biretta worn by the Independent Filipino Church. Never let it be said we do a half-hearted job here at DB Towers. Some of the younger nuns are out there in the field, travelling the world to find interesting hats for you to enjoy. 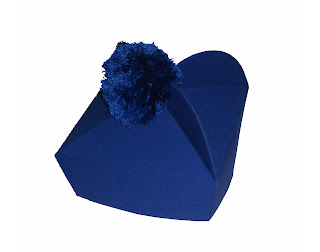 Aptly, as the snow around the convent begins to melt we proudly present to you, a cardinal's "winter" biretta. It is made of fine wool serge. Today this is the only biretta a cardinal may wear outside of liturgical functions, as when he is in choir dress, he wears the watered silk biretta instead. In abito piano it must be the wool version, as displayed here.
Most cardinals these days wear only the watered silk scarlet pileolus outside liturgical functions, which as you might expect is utterly beyond our comprehension. Really, can you imagine being allowed to wear a hat and then choosing not to? 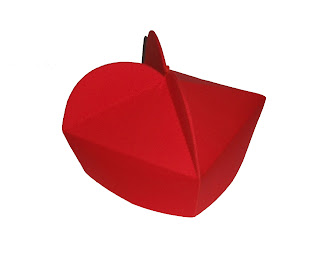 I know what you're thinking. You're thinking they've excelled themselves with this one. And you'd be right. We've revisited the biretta of the Superior of the Institute of Christ the King Sovereign Priest, with a watered silk outer and silk lining, but topped with the extraordinary plumage of a Gamarelli silk pom-pom. Sometimes when all the sisters are asleep, we like to sit, quietly, just marvelling at it.
Best be going. Mother Prioress has hired in a pre-lenten devotional coach who used to be a chaplain to the Royal Marines. She's stood at the door brandishing the convent's arctic fire hose and claims she can smell pride in here... 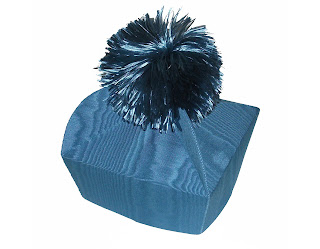 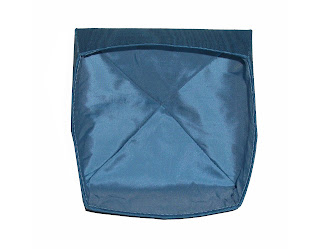 More sumptuousness today, for here we most proudly present the The Burgundy Red Velvet Biretta worn by the Dean of Paderborn Cathedral. It is piped in matching burgundy, lined in silk, and crowned with a magnificent silk confection from Gamerelli. We're loathe to call it a pom-pom really, I mean - just look at it. Exquisite is it not?


A hoarse bark from behind the racing post informs us that red velvet or not, cooing over a fancy hat isn't going to shift the snow that's currently mounting up on the lady chapel altar. 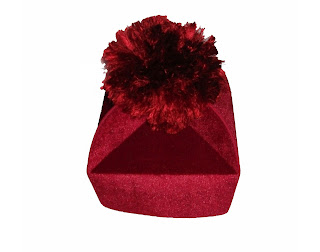 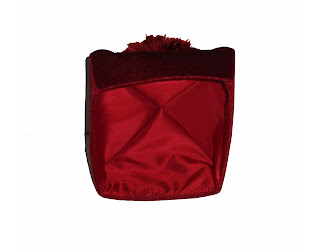 Lavish, frankly, is all we can say. Here is the scarlet red velvet biretta as worn by the Provost of Paderborn Cathedral, adorned tastefully as it is with scarlet velvet.


Many of the dear sisters would be grateful of a hat of such virtue; the convent gas metre has seized up in the freezing cold, and won't even admit the fifty pences from last years lent boxes. We wonder if Paderborn cathedral ever had problems with the heating, thus necessitating a toasty warm biretta for its hierarchy? 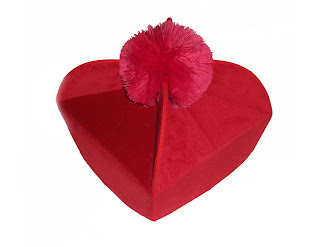 …and wintry day here at DB Towers, and it is that our thoughts turn to this offering, a suitably Grey Biretta to coordinate with the rather unforgiving sky outside.
This Biretta is worn by the Old Polish Catholic Church of the Mariavites (http://www.mariawita.pl/htmls/indexang.html), which at least provides a note of the exotic to brighten your afternoon. Mother seems to be minded that if we’re in the business of making grey birettas, surely pinstripe is not far away. 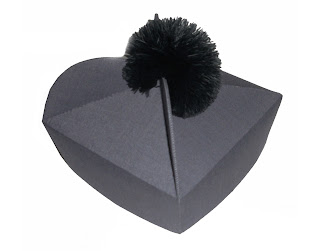 It’s been a while…

…has it not, dear readers? Our sincere apologies for frankly being a bit slapdash with our blog entries, we hope this delightful royal blue watered silk biretta will make up for it. It is worn by some Episcopalian Clergy in the United States in honour of the Blessed Virgin Mary.
We’d say get your orders in for Candlemass now, but we shan’t for fear of the excoriating anathemas of Mother Prioress, denouncing us as she is wont to do as usurers and simonists of the worst sort. 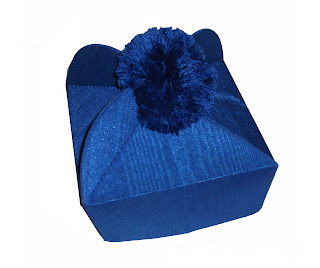 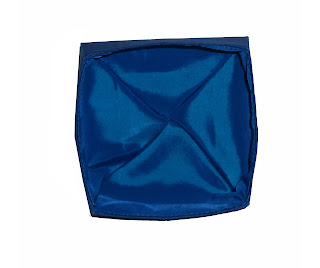 
Herewith the pink tufted hat of an Apostolic Protonotary, and a fine looking hat it is too. More of this we shall not say, lest the contentious amongst you be tempted to commit internet-related wickedness on the comment thread… 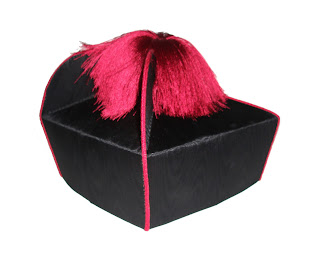 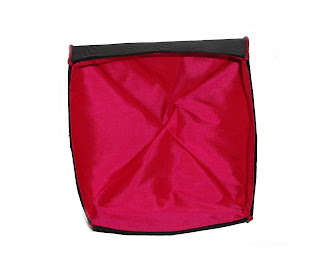 We hope you enjoy the content of this Blog. It is an endeavour of love and for entertainment rather than a deeply serious endeavour. We are merely enthusiasts and creators of clerical headgear, usually the more outlandish and unusual the better.

We also aim to provide our efforts gratis for those who genuinely cannot afford them, at home or abroad. For those who can afford to pay, we can produce bespoke birettas for the price of materials and a suggested (but optional) amount to keep us going.

Feel free to drop us a line at: domusbirettarum@gmail.com
God bless you.